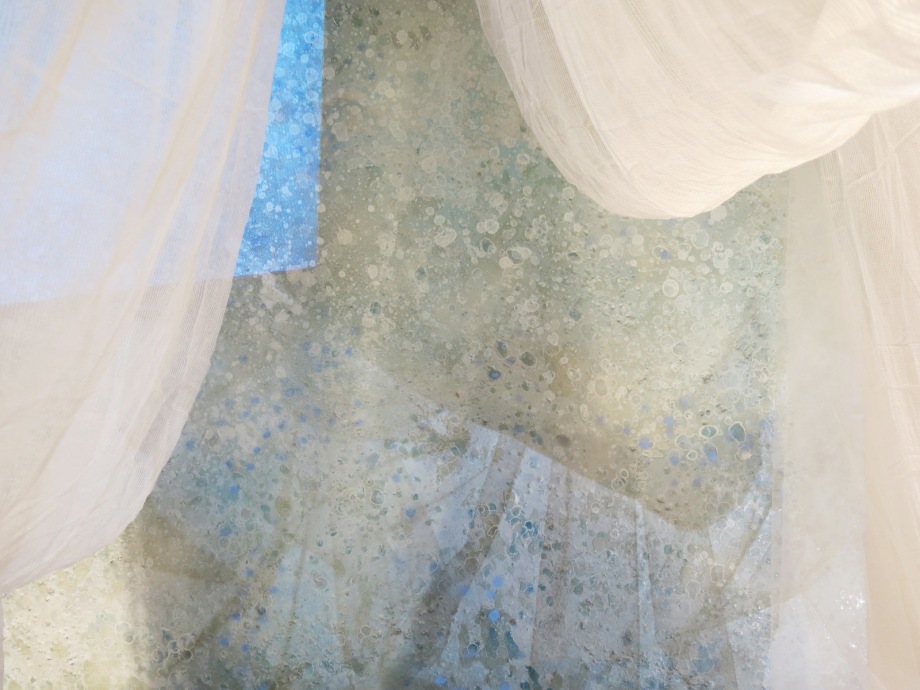 CLEW: A RICH AND REWARDING DISORIENTATION came into being after an 18 month exploration of ideas between artists Deborah Barlow, Todd Hearon, Jung Mi Lee and Jon Sakata, and curator Lauren O’Neal. Those efforts coalesced in an installation at the Lamont Gallery at Phillips Exeter Academy, Exeter, New Hampshire, January through April, 2017.

Clew: The word can mean variously a ball of yarn, part of a ship’s sail, and an expanse of wings. The most famous clew in Western culture was the ball of thread given to Theseus by Ariadne, used to guide the hero back through the labyrinth of the Minotaur. Over time clew has come to mean “a fact, circumstance, or principle which, being taken hold of and followed up, leads through a maze, perplexity, difficulty, intricate investigation” (OED). The labyrinth in that famous story is often a metaphor for what is baffling, complex and unfathomable. But a labyrinth can also suggest the mysterious and uncanny. Wandering through a maze—to be in a state of “amazement”—can be a rich and rewarding disorientation. When sailing in uncharted waters, the clew we need is one that brings us into proximity to the unknown and then back out again. Wings open and expand.

Clew is an artistic collaboration that emulates the labyrinth with its confluences and unexpected turnabouts. Using overlays of music, poetry and visual arts, four artists give viewers and listeners new ways to see, hear and navigate a tripartite, intricately layered world. Within the setting of a physical gallery space, all three formats intermingle freely, and scheduled events shift the central focus from poetry to sound to the visual. Experienced individually or collectively, Clew compounds and expands into a journey of multidimensionality and surprise.

In addition to these concepts, Jon Sakata articulated additional themes that were influential in building the framework of the installation:

– Dismantling
Desire a dismantling of labyrinth as “traditional” technology of/toward a centralized ending, predetermined path to an end goal, a sacrosanct solutionism to one’s problems by following “the” way.

– Viscosity
A common property we find in the paintings and texts: to further complicate in how one “reads/sees” Todd’s text, a series of small installations that make these acts of engagement more “difficult.” Is there a way of making listening a more “viscous” attunement?

– Hyperobjects
Things, objects, phenomena that are outside or beyond “human” perception and localization. Timothy Morton provocatively has developed an ecological perspective/critique that eschews “container concepts” such as environment, Nature, biosphere, sustainability, Earth, world. Deborah’s paintings, for us, are map-visions of hyperobject phenomena, processes, “places” that defy our held images of “this” world, Earth, Nature, etc.; yet strike an uncanny sense of recognition of what could be these “things” as hyper-things.

Propose a paradox that by articulating the gallery spatial design; dismantle the space as a known/comfortable container for viewing art, toward a labyrinthine condition to confront and create one’s own mental cartography of multi-sensory encounters, untangling (pre)conceived expectations and cultural programming, potency of language without (or with less) access to handrails of descriptive explanation. Or is it as Borges said: “There is no need to build a labyrinth when the entire universe is one.” Dismantle the accepted ground plan of “labyrinth” in order to express something of an (imagined) universe…

Some of the books and thinkers that informed this project:

Clew in the making, documented by Deborah Barlow on her blog, Slow Muse:
Clew: A Collaboration
Clew: In Process
Clew: A Rich and Rewarding Disorientation
Clew Takes on a Life of Its Own